Margaret Tudor was Henry VIII’s older sister and became the Queen of Scotland after her marriage to James IV in 1503. Her life was troubled and fraught with tension. She was continually caught between her country of birth and the country she ruled. After James IVs death, she made the disastrous decision to marry the Earl of Angus, threatening her regency and forcing the Scottish council to send for the Duke of Albany to rule in her stead. Over the years, Margarets allegiance swung between England and Scotland, making her brother Henry VIII both her ally and her enemy at times. Although Margaret wished for peace between the two countries, these were tumultuous years and she didnt always make the wisest choices. Yet, all she did she did for her son James V, and…

For many years, I thought the Church picked December 25 as Jesus’s birthday to counteract the popular pagan winter festivals. Although that has something to do with the date for the Christian holiday, a peek at the 1908 Catholic Encyclopedia reveals the background is more complex. Madonna and Child, a 1460 painting by the master of the Osservanza (public domain image via Wikimedia Commons)

In Christianity’s first couple of centuries, the birth of Christ was not celebrated. St. Irenaeus and Tertullian, who were second- and third-century fathers of the Church, don’t list Jesus’s birth among Christian festivals. Until the third century, the only universal holidays were Easter and Pentecost.

Yet others who lived at that time were calculating when Jesus was born, and there were multiple… 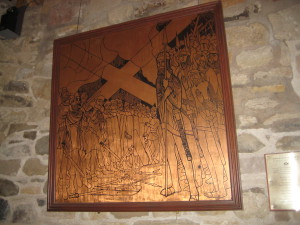 The St Andrew’s Cross or Saltire is Scotland’s national flag. Tradition has it that the flag, the white saltire on a blue background, the oldest flag in Europe and the Commonwealth, originated in a battle fought in East Lothian in the Dark Ages.

It is believed that the battle took place in the year 832AD. An army of Picts under Angus mac Fergus, High King of Alba, and aided by a contingent of Scots led by Eochaidh (Kenneth mac Alpin’s grandfather) had been on a punitive raid into Lothian (then and for long afterwards Northumbrian territory), and were being pursued by a larger force of Angles and Saxons under one Athelstan.

The Albannach/Scots were caught and stood to face their pursuers in the area of Markle, near East Linton. This is to the north of the modern village of Athelstaneford (which was resited on higher ground in the 18th century), where the Peffer, which flows into the Firth of Forth at Aberlady, forms a wide vale. Being then wholly undrained, the Peffer presented a major obstacle to crossing, and the two armies came together at the ford near the present day farm of Prora (one of the field names there is still the Bloody Lands).

Fearing the outcome of the encounter, King Angus led prayers for deliverance, and was rewarded by seeing a cloud formation of a white saltire (the diagonal cross on which St Andrew had been martyred) against a blue sky. The king vowed that if, with the saint’s help, he gained the victory, then Andrew would thereafter be the patron saint of Scotland. The Scots did win, and the Saltire became the flag of Scotland.

When Kenneth mac Alpin, who may have been present with his grandfather at the battle, later united Picts and Scots and named the entity Scotland, Andrew did indeed become the patron saint of the united realm. Kenneth mac Alpin, King of Scots and Picts, Ard-righ Albainn, was laid to rest on Iona in 860AD.

via The Life of Indentured Servants in Colonial Barbados

Thomas of Erceldoune, Thomas the Rhymer, True Thomas: this man of many names, famous for his journey to the land of the fairies and the gifts he gained there, is a prominent figure in the Between Worlds exhibition. In this post, singer Poppy Holden explores the first written account of Thomas and how the seemingly inexplicable events of the story have a curious link to the real world geography of Melrose.

Recently, I met some distinguished physicists who were amused that I was investigating a story with characters who move between our world and another, what? Dimension? Something like that. They thought I…

via The Real True Thomas

John Knox, the controversial Scottish Reformer, is often portrayed as a cartoon Calvinist who hated women and trumpeted fire and brimstone from the pulpit. However, the notorious Scottish Reformer was a complex character whose life reads more like an adventure thriller than a history. And, love him or loathe him, you cannot deny the impact he has had on Scottish history, culture and psyche. Despite that – or because of that – most people know very little about him. In this article I share some of the surprising things I’ve discovered in my research on Knox for my fictional biography.

1. Roman Catholic Priest – After studying logic, rhetoric and canon law at St Andrews University Knox was ordained a priest in 1536. With not enough parishes for all the priests, he became a Notary Apostolic, a country lawyer.

2. Bodyguard – In the 1540s he fell under the spell of George Wishart, the charismatic Protestant preacher who ‘pulled him from the puddle of papistry’. He dropped everything to follow his master, taking up a two-handed sword to defend him from persecution by Cardinal David Beaton. When Wishart was arrested and sentenced to burn at the stake, Knox went into hiding.

3. Galley Slave – After a year in hiding, Knox was called to St Andrews to preach to the Castilians under siege in the castle for assassinating Cardinal Beaton. Knox was arrested and sentenced to toil in the galleys for 19 months – a fate worse than death. He was not expected to survive but the ailments he contracted vexed him for the rest of his life.

4. Church of England Chaplain – Freed from the galleys, Knox became a preacher in the north of England before being called to London as chaplain to Edward VI. He refused promotion in the English church, turning down the vicarage of All Hallows, London, and the bishopric of Rochester.

5. Political Exile – When Catholic Mary Tudor ascended the throne, Knox fled persecution to Geneva where he became even more Calvinist than Calvin. The Swiss reformer considered his polemical tract The First Blast of the Trumpet against the Monstrous Regiment of Women too inflammatory with its call to depose ungodly female monarchs.

6. Babe Magnet – The First Blast, denouncing female rule for being contrary to natural and divine law, has forever labelled Knox a rampant misogynist, even though he only voiced what most men of his time believed – that women were inferior creatures and not suited to wielding power – only much more vociferously. In fact, he loved women’s company – as his tender letters to his mother-in-law and correspondent, Anna Locke reveal – and women were drawn to him. Like Billy Graham, he must have had some charisma!

7. Author and Translator – As well as his History of the Reformation in Scotland and polemical pamphlets, Knox worked briefly with Miles Coverdale on the English translation of the Geneva Bible.

8. Agent Provocateur – With a network of spies that William Cecil, the English spymaster would envy, Knox was often the first in Scotland to find out about important events such as the death of Francis II, Mary Queen of Scots’ first husband, and David Riccio’s murder. However, he was more provocative than secret as an agent.

9. Husband and Father – Knox was married twice – both times to teenagers. His first wife, Marjory Bowes, who bore him two sons, died at the tragically young age of 25. At the age of fifty, he married 17-year-old Margaret Stewart, a distant relative of Mary Queen of Scots who was furious when she found out about her new in-law. Meg bore him three daughters.

10. Marriage Guidance Counsellor – while Knox often clashed with Queen Mary on religious matters – on a more personal level, they joined forces to try and reconcile the queen’s half-sister with her errant husband. But did they have an affair – as one questioner asked at one of my talks. The jury is still out.

11.Social Reformer – Knox co-authored The First Book of Discipline, a manifesto for the Reformed Scottish church, which proposed a school in every parish, a network of ministers and a system of poor relief. He assumed the Kirk would take over the Roman Catholic Church’s revenues, but he did not factor in the greed of the power-hungry lords. Thomas Randolph, the English envoy, considered his democratic vision to be centuries ahead of its time.
12.Parking Lot Burial – At the age of 59, Knox died in his bed surrounded by his family – and not atop a burning pyre as he always feared. He was buried in St Giles’ cemetery, his grave marked by Parking Lot No 23 in the High Street.

The Knox Trilogy is now published by Penmore Press

The First Blast of the Trumpet

Marie Macpherson
Create a free website or blog at WordPress.com.